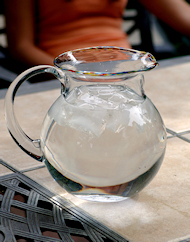 Using a hose to sweep instead of a broom will waste, unnecessarily, some 25 gallons of water in 5 minutes of hosing. Sweeping the sidewalk or driveway will get them clean enough.

First, the water is collected from surface water or ground water sources that are replenished by precipitation.

Next, to make sure water supplies are reliable even during long dry periods, water supply companies use dams or reservoirs to store large quantities of water that can be used in the event of a water supply emergency.

Some systems bring water hundreds of miles through pipes or special channels called aqueducts to treatment facilities that make sure our water is safe to drink.

The final step is distribution. Water is pumped or fed to your home through a complex series of underground pipes. The result is water at the turn of a faucet, when and where it's needed.

Being aware of how much water you and your family use is the first step in conservation. On average, each individual uses about 50 gallons of water each day. You can determine your average daily water use by using one of the following two methods:

If your water use is not metered, you must determine your water use for each fixture. Flow rates for showers and faucets can be measured by using a container and watch to measure the amount of water discharged through the fitting in a minute. You can approximate toilet use per flush by measuring the volume of water inside the toilet tank (width x length x height) and dividing by 231. (There are 231 cubic inches in a gallon of water). After you have determined the water use of each fixture, you will need to record the number of uses and the length of time each fixture is used to determine your average daily water use. Remember to estimate the amount of water used by appliances such as clothes washers and dishwashers as well as home water treatment systems.

Long ago, drinking water from a central source was distributed through a system of wooden pipes. When water was needed to fight a fire, a hole was drilled in the wooden pipe. When the fire was over, a wooden plug was used to close up the hole. These "fire plugs" were then marked for future use.

In the United States, average daily water consumption is 185 gallons per person.

Using a hose to sweep instead of a broom will waste, unnecessarily, some 25 gallons of water in 5 minutes of hosing. Sweeping the sidewalk or driveway will get them clean enough.


Water heaters often are set at 140 degrees. You can save energy by turning the temperature on your water heater down to 130 degrees. Don't go any lower because some harmful bacteria could survive.

It takes 2,072 gallons of water to produce 4 new automobile tires.

Indoors normally 40% of used gets flushed down toilets, more than 30% is used in showers and baths, the laundry and dishwashing take about 15%, leaks take 5% or more, which leaves about 10% for everything else.

If you have a lawn, chances are it's your biggest water gobbler. Typically, at least 50% of water consumed by households is used outdoors. Inside your house, bathroom facilities claim nearly 75% of the water used.

Some people thoughlessly flush away tissues and other bits of trash in the toilet. Using a wastebasket instead, will save all those gallons of water that otherwise go wastefully down the drain.

A dairy cow must drink 4 gallons of water to produce 1 gallon of milk.

If everyone in the U.S. could manage to use just one less gallon of water per shower every day, we could save 85 billion gallons per year.

Nearly 97% of the world's water is salty or otherwise undrinkable. Another 2% is locked in icecaps and glaciers. That leaves just 1% for all of humanity's needs - all its agricultural, manufacturing, community and personal household need.
The average 5 minute shower takes between 15 and 25 gallons of water.

It takes 1,500 gallons of water to process one barrel of beer.

About 800,000 water wells are drilled each year for the U.S. for domestic, farming, commercial, and testing purposes.

You can refill an 8 oz. glass of water approximately 15,000 times for the same cost as a 6-pack of soda.

If everyone in the United States flushed just one less time per day, we could save a lakeful of water about a mile long, a mild wide, and four feet deep every day.

Light watering your lawn doesn't get water deep down into the soil. The grass develops shallower roots and is both less drought-resistant and more prone to winterkill. Don't sprinkle grass lightly, deep-soak it.

One inch of rain equals 27,000 gallons of water per acre.
Delaying lawn watering during the first cool weeks of spring encourages deeper rooting and makes your lawn healthier for the rest of the summer. It also delays the first time you have to mow the grass.

Little leaks add up in a hurry. A faucet drip that totals only two tablespoons a minute comes to 15 gallons a day. That's 105 gallons a week and 5,460 wasted gallons of water a year.

There are over 1 million miles of water pipelines in the United States.

Water is the only substance on earth naturally found in the three true element forms: solid, liquid and gas.

Water is the most common substance on earth.
75% of the earth is covered with water.

A person can survive one month without food, but only one week without water.

86% of Pennsylvanians are served by public water.
Water is composed of 2 hydrogen elements and 1 oxygen element.

It takes 2 gallons of water to brush your teeth, 2 to 7 gallons to flush a toilet and 25 to 50 gallons to take a shower.

The first water plant in the United States was built in 1872 in Poughkeepsie, New York.

One gallon of water is equal to 3.785 liters of water.

One cubic foot of water is equal to 7.48 gallons of water.

There's really no need to fully wash dishes before loading them into the dishwasher. Just scrape off food scraps and rinse. And to save water, make sure your dishwasher is full before running it.

Modern water treatment plants maintain the quality of our drinking water today. Here's how they work:

Sludge formed in the bottom of the sedimentation tank is removed and treated. Lime slurry may be added to the water to soften it (that is, remove minerals that cut down on water's ability to clean clothing, etc.) Flocculation takes place when the clumps of particles (the "floc") become heavy enough to settle at the bottom of the sedimentation tank. A filter removes fine particles and other impurities. Disinfection, often with chlorine, is used to destroy disease-causing bacteria.

Pumps send the clean water into Easton Suburban Water Authority's supply system, which brings the water to your home or business.

Water-saving devices are economical and permanent. Low-flow showerheads and faucet aerators save valuable water and energy used to heat water without requiring changes in personal water use habits.

The amount of savings depends on current water consumption habits, water, sewer and energy costs, current flow rates of fixtures and flush volumes of toilets, system pressure, and the amount of water leakage through fittings and toilets. You can conserve by installing water-saving equipment in place of conventional plumbing fixtures, fittings and appliances.

Pennsylvanians have access to an abundance of water much of the time, so the importance of clean water is often overlooked. For most of us, water use is a habit. We are accustomed to having water available at the twist of a faucet. We usually do not think about how much water we use.

In 1900, each of the 6 million people living in Pennsylvania used about 5 gallons of water per day. Since then, our population has doubled to almost 12 million people, and our water consumption has increased to an average of 50 gallons per person per day.

Part of this 900 percent increase in water use is due to the many modern water-using conveniences in our homes, such as automatic dishwashers, clothes washers, garbage disposals and home water treatment systems. A significant change in water use occurred when the bathroom was moved indoors. It is ironic that we use one of our most precious resources to carry our waste away.

Our water resources are not unlimited. They are affected every day by precipitation, population growth, economic development and pollution. Because water is a resource that must be shared, competition for its use is an ever-increasing management problem.

In the past, we attempted to alleviate our supply problems by constructing storage facilities and developing new resources such as wells and reservoirs. However, these measures can be costly, both economically and environmentally. A more cost-effective way to protect our water resources is through sound management and conservation.

To make sure you have sufficient water supply now and in the future, water utilities, including Easton Suburban Water Authority, are working on four focus areas:

Protect water supply sources - Efforts are being made to prevent pollutants from reaching ground water and surface water sources. This effort is especially critical in today's world of terrorist threats to public water supplies. 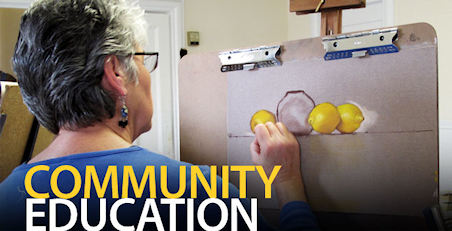