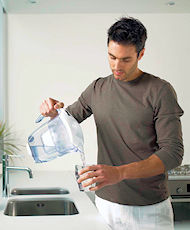 The Safe Drinking Water Act (SDWA) was signed into law on Dec. 16, 1974. The purpose of the law is to assure that the nation's water supply systems serving the public meet minimal national standards for the protection of public health.

The SDWA covers all public water systems with piped water for human consumption with at least 15 service connections or a system that regularly serves at least 25 individuals. The SDWA directed the U.S. Environmental Protection Agency (EPA) to establish national drinking water standards. These standards limit the amount of certain contaminants provided by public water. The Food and Drug Administration (FDA) regulations establish limits of contaminants in bottled water.

All drinking water, including bottled water, may reasonably be expected to contain at least small amounts of some contaminants. The presence of contaminants does not necessarily indicate that the water poses a health risk.

More information about contaminants and potential health effects can be obtained by visiting the EPA web site or by calling the EPA Safe Drinking Water Hotline at 1-800-426-4791.